So you’ve decided you want to set up in aesthetics, and are busy researching Botox courses. Great choice. But if you really want to be successful in the aesthetics industry, your training is just the start.

To thrive as a Botox practitioner, it’s important to know how your patients and prospective patients feel about treatment. Get inside their minds and understand not only their hopes, but also their concerns – and any barriers that may be holding them back.

After all, if you know what’s stopping them, you’ll know how to reassure them.

There are plenty of misconceptions about Botox, and being able to address them with your patients is vital. Unfortunately, this isn’t usually covered during most Botox courses.

So to give you something to think about, here are 4 of the most persistent concerns, along with some guidelines for what to say to your patients. 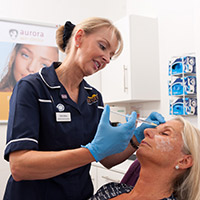 Despite its popularity and widespread use, some people are still unconvinced about the safety of Botox. They believe that, because it’s a toxin, it has the potential to be harmful when injected.

But as practitioners, we know that Botulinum toxin is extremely safe when administered in the right dose by a qualified medical professional. So stress that to your patients.

You can also tell them that Botox has been safely used for many years in a medical context, to treat migraines, bladder problems, etc, which should help allay their fears.

Ah, the dreaded ‘frozen face’. It’s a very real fear for some people that their face will be rendered blank and immobile by Botox. They might have seen unflattering pictures of celebrities and be terrified of having the same outcome.

So for those patients, let them know you’ll take a conservative approach. You can always top up at a later date if needed. Stress that you believe in achieving the most natural results rather than the most dramatic – and if that means erring on the side of caution, so be it.

Like most aesthetic pursuits, the early adopters for Botox were celebrities. But it’s now grown in popularity so much that it’s now the world’s favourite non-surgical treatment.

And as it’s grown in popularity it’s become more affordable and accessible. So the chances are that everyone knows someone, or knows of someone, who’s had it.

So let your patients know that far from being something famous/rich/vain people do, it’s something that at least some of their neighbours, friends and colleagues are likely to have done!

> Botox is scary and painful

Needles and injections can strike terror into the hardest of hearts. And here’s where your powers of reassurance need to be at their best.

Let them know exactly what they’ll feel. A slight pinching sensation that will be over in a matter of seconds. Tell them people often compare it to a mosquito bite, so if they’ve ever had one of those, they’ll know they can deal with it.

Stressing that the treatment doesn’t require anaesthetic should also help reassure them that any discomfort is likely to be minimal.

Find out more about our Botox courses

Cosmetic Courses are the UK’s most established Botox training provider. We offer scheduled and bespoke Botox courses to medical professionals at fully equipped training centres throughout the UK. For information about our Botox courses, or to book, call us on 01844 318317 or email [email protected].

We often receive enquiries asking about particular aspects of our training courses – most commonly our Foundation and Advanced Botox and fillers courses.

With that in mind, we thought it’d be a good idea to answer some of the questions we are often asked here on our blog.

Am I eligible to attend a Botox and fillers course?

Our Botox courses are open to qualified medical professionals, which includes (but is not limited to) Doctors, Dentists, Registered Nurses, Surgeons, Trainee Surgeons, Dermatologists and Opthalmologists. If you belong to another medical profession and would like to check your eligibility, please contact us on 01844 390110 and we’ll be happy to advise.

Do I need to be UK registered to offer Botox treatment in the UK?

Yes. If you’re looking to offer Botox treatments to patients in the United Kingdom, you must have a current active UK registration.

Do I need to bring my own models?

No. We’ve built up a large database of models and will provide an appropriate model for your training needs. However, if you’d prefer to bring your own model, you’re more than welcome to do so. Many delegates choose to bring along a friend or colleague so they can see how their treatment progresses over time. Just let us know when you book your Botox and fillers course and we’ll be happy to accommodate.

What should I wear to my Botox and fillers course?

You should come in what you feel comfortable in. You will be treating real patients, so we’d encourage you to look relatively smart and professional. But the most important thing is that you feel confident and able to focus on what you are learning.

How much hands-on practice will I get?

The Botox and fillers course is practical in nature. After a morning of theory, it’s straight into hands-on practice in the afternoon.  You will mark up your model, choose the treatment you’re going to use and perform the treatment, supervised closely by your trainer. You’ll also watch other people in your group as they treat their models.

If you opt for one of our one-to-one courses, these are completely tailored to you, so you can choose your own balance of theory and practical.

How many people will be in the practical session?

We like to keep the training groups as small and informal as we can. We’ve found that 4 or 5 is the best group size to give you the best possible training.

Will I receive any information on business and marketing?

Running a successful aesthetic business requires more than clinical skills. To help you with the business aspects of practice, we will offer guidance about setting up your website and publicising your business.

We also have other resources to help you on an ongoing basis, including podcasts available to download from iTunes. In these, our Surgical Director Adrian Richards speaks about all aspects of aesthetic marketing with Ron Myers from Consulting Room.

Will I receive any support after completing my Botox and fillers course?

We pride ourselves on our comprehensive ongoing support. If you have any questions at all after completing your training, whether clinical or business related, you are always welcome to contact us for guidance.

With our delegates’ permission, we often answer some of the questions we receive in videos or other training materials so other people can benefit from the advice.

Cosmetic Courses offers aesthetic training in Buckinghamshire, Leeds, Manchester, Birmingham, Essex and Kent. For more information about what to expect from our Botox and fillers course, please contact the team on 01844 390110 or email [email protected].

Are you a dentist looking for more from your career? Perhaps you’d like to continue using your practical skills and aesthetic eye, but in a new way – and increasing your income in the process?

At Cosmetic Courses, we’ve spent the last 15 years training dentists in Botox and Dermal Filler techniques. Some were looking to offer aesthetic treatments part-time alongside their existing practice, and others were looking for a complete career change.

If you are a dentist thinking about your next move, read on to find out what aesthetic training could do for you.

1. You can offer Botox treatment as an additional service to your dental patients

Some dentists we train are looking to add Botox and dermal filler treatments around the mouth to their existing portfolio, so they can enhance the dental service they provide. Treatment to add volume to lips, improve nasiolabial folds and reduce marionette lines can be combined with dental treatment to give patients a more dramatic improvement to the entire mouth area. This is probably the ‘easiest win’ as it represents a brand new revenue stream from your existing client base.

2. You can attract a whole new clientele looking purely for aesthetic treatments

Non-surgical procedures like Botox and dermal fillers can attract new patients who would not have come to your practice for dental treatment alone. These patients may come to you for aesthetic treatment in the first instance, and once they have built up a relationship with you, may also choose you for their dental treatment. Expanding your aesthetic repertoire further to include treatments that complement Botox and fillers, for example Dermaroller and Chemical Peels, will give your patients even more reasons to keep coming back to you.

3.  You can train up colleagues within your practice to perform the techniques

When you have completed your own Botox training course, you will be able to instruct your fellow dentists in the techniques. Lots of our dental delegates at Cosmetic Courses have gone on to train other dentists and hygienists within their practice in non-surgical treatments.

Having more colleagues trained in the techniques will not only increase your capacity to offer aesthetic treatments at your practice, it’ll give you the flexibility to go off and learn more aesthetic techniques while your colleagues ‘hold the fort’. You’ll also be better placed to respond to patient demand, adjusting the balance of your dental and aesthetic appointments to meet patients’ needs. If more people are looking for aesthetic treatments than dental appointments, you’ll be able to accommodate them – and crucially, have a constant revenue stream.