The allure of youth is potent, especially to women who feel pressured society to look a certain way. When medical procedures that could improve the appearance of frown lines between brows emerged, women all over the world clamored to be the first line. Shortly, these women became frequent customers fueling a multi-billion pound industry.

Botox Cosmetic (Botulinum Toxin Type A) contains the same toxin that causes food poisoning. Used in a clinical setting in an injectable, sterile form, the Botox blocks the release of acetylcholine, which nerve cells use to signal muscle contraction. A doctor can use the Botox to interfere selectively with the muscles’ ability to contract. The process smoothes the frown lines and, in many cases, makes them invisible within a week. This result has made Botox injections the most prevalent cosmetic procedure in the world including breast enhancement surgery.

In the US, the FDA initially approved Botox in 1989 as a treatment for misaligned eyes (strabismus) and uncontrollable blinking (blepharospasm). In 2000, this approval widened to include severe neck and shoulder contractions (cervical dystonia). It was during the treatment of strabismus and blepharospasm that doctors realized it was softening the glabellar lines between eyebrows. This vertical frown between the eyebrows is what makes people look angry, displeased or tired.

Additional clinical studies commenced and by 2002, the US’s FDA was satisfied with the evidence of Botox’s safety and ability to reduce frown lines for up to 120 days. However, the FDA approves products but does not regulate their use. This flexibility has led to a wide range of procedures in the US of which there have been no clinical evaluations and certainly no explicit demonstration of safety.

Another factor driving the popularity of Botox among women is the social aspect that has become a part of the drug’s marketing. Volume discounts are available for many types of medicines including Botox. Therefore, it has become a prevalent practice for doctors to purchase Botox in bulk and then hold gatherings for their patients. Women gather at these Botox parties for the injection at a discount, food and drink, and camaraderie. This phenomenon began in the US but has since emerged everywhere where Botox injections are legal.

Regulatory agencies around the world, such as the MHRA and FDA, have indicated increased concern over the potential for Botox abuse. The social aspect of the drug has led to unqualified technicians performing the procedure in home-based offices, retail venues, gyms, and salons. In these situations, the patient runs serious risks of inappropriate dosages and unsanitary conditions. However, this does not dissuade millions of women from repeating the process continuously, chasing that ever-elusive fountain of youth. 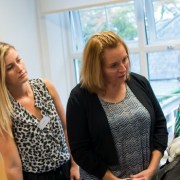 The Apprentice result – good for Botox’s reputation or bad?

The ‘new Botox’ – or Frotox – arrives in the UK